The hands, being composed of many types of tissue, including blood vessels, nerves, skin and skin-related tissues, bones, and muscles/tendons/ligaments, may show changes that reflect a disease that affects other parts of, or even the whole body (systemic diseases). The hands may show changes noticed by the patient or his/her hand surgeon even before the systemic disease is detected. Below are a number of examples. 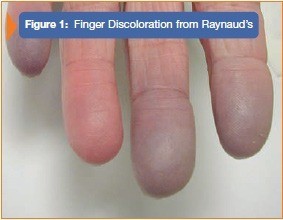 Raynaud’s phenomenon (temporary spasm of the arteries in the fingers, resulting in coolness and bluish/purple discoloration – see Figure 1) may occur with rheumatoid arthritis, systemic lupus, and scleroderma, to name a few. If the condition is more severe, fingertip ulcers may result from the poor circulation. 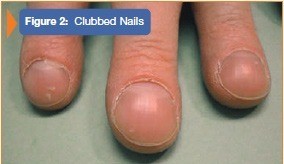 The finger nails may develop an unusual clubbed shape (see Figure 2) with some heart or lung diseases.

Another disease of the blood vessels, Buerger’s disease, affects the small arteries, resulting in inadequate blood supply to the fingers. This often results in ulcerations, and even gangrene (see Figure 3).

Rheumatoid arthritis causes destruction of joints, ligaments and tendons. It can have widespread effects throughout the body. Tendon rupture (see Figure 4) may result in limited ability to straighten a finger(s), and may be one of the first signs of rheumatoid arthritis. 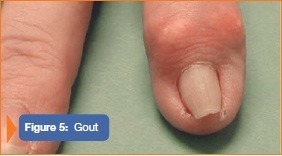 Gout, a disease of uric acid metabolism, may present as a yellowish-white nodule on a digit (see Figure 5). The skin may become thin to the point of draining and thus be confused with an infection, especially if there is an acute, painful attack of the gout. Severe bone changes may exist beneath the skin. In this case, there is also a nail deformity characterized by a severe curvature, called a “pincer nail”. This can cause pain and ingrowing of the nail. 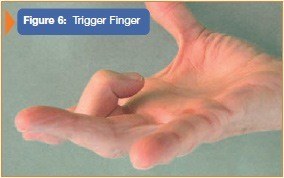 Diseases of the hormones (endocrine system), may result in changes of tendon and ligament tissue. Diabetes is a known cause of “trigger finger” (see Figure 6), in which the finger may be temporarily locked in the flexed position, often with pain. 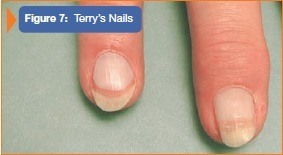 Liver and kidney diseases may also cause changes in the skin and in the nails. Below is an example of discoloration of the nails, called Terry’s Nails (see Figure 7), where most of the matrix under the nail is white. There is a small rim of pink at the matrix near the fingertip. This type of nail change is seen with liver disease.