Skin cancer of the Hand and Upper Extremity

What Is Skin Cancer? 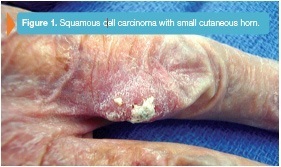 Skin cancer is a change in some of the cells of your skin such that they grow abnormally to form a malignant tumor. These abnormal cells can invade through the skin into adjacent structures or travel throughout your body and become implanted in other organs and continue to grow, a process called metastasis. The skin is the most common part of the body in which cancer develops. In the hand, squamous cell carcinoma is the most common type of skin cancer, followed by basal cell carcinoma and melanoma. There are other, more rare forms of skin cancer, such as Kaposi’s sarcoma, dermatofibrosarcoma protuberans, sweat gland tumors, and Merkel cell carcinoma, to name a few.

What Are The Risk Factors?

Squamous cell carcinoma, basal cell carcinoma, and melanoma are all associated with chronic sun exposure, light or fair complexion, and immune suppression. Other factors include radiation exposure, exposure to certain chemicals, such as arsenic, and certain genetic conditions, such as xeroderma pigmentosum and Gorlin syndrome. Pre-malignant lesions, such as actinic keratosis, cutaneous horns, and Bowen’s disease, may develop into squamous cell carcinoma. Family history and certain types of nevi (moles) may also indicate a predisposition to melanoma.

Squamous cell carcinoma (SCC) may look like small firm nodules on the skin. They are often brown or tan in color, and may show scaling, ulceration, bleeding, or crusting. The scaly, crusty top layer can build up, creating a cutaneous horn (see Figure 1). Some people may mistakenly think that the cancer is just a cut or infection that just doesn’t seem to heal (see Figure 2). Some SCC’s will present as large, mushroom-like growths. SCC has a significant potential to metastasize, especially to lymph nodes.

Basal cell carcinoma is classically described as a small, well-defined nodule with a translucent, pearly border, with overlying telangiectasias (abnormal superficial tiny blood vessels). These too may ulcerate and look like a chronic sore. They tend to be slower-growing, with less of a tendency to metastasize.

Melanomas often look like moles or birthmarks, but lesions that show increased growth, variations in color or shape, irregular borders, and/or are larger than 6 mm (1/4 inch) diameter are suspicious for melanoma. The letters ‘ABCDE’ provide an easy way to remember these warning signs, any of which could suggest a melanoma (see Figure 3). Melanomas have a very high potential to metastasize.

How Are These Diagnosed? 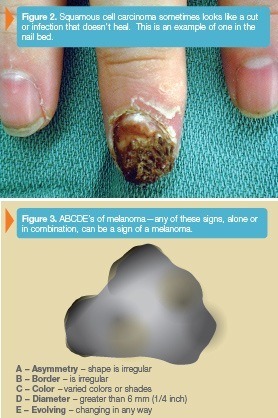 Diagnosis starts with you asking your doctor to inspect the skin lesion. A careful history and physical examination is performed. A biopsy is needed to confirm that the lesion is malignant and can either be done taking only a small part of a big lesion or excising and removing a small one in its entirety.

What Are The Treatment Options For Skin Cancer?

The standard therapy is surgical removal of the cancer with appropriate margins that are free of cancer cells at the edge of the excised tissue. Additional interventions such as skin grafting, tissue flap coverage, local amputation, radiation, and/or chemotherapy may also be needed.

The best treatment for skin cancer is prevention. Wear protective clothing and sunscreen, and avoid high-risk exposures to other causative agents. Also, the prognosis is much better with early detection, so check your skin regularly, and show any lesions to your doctor promptly.